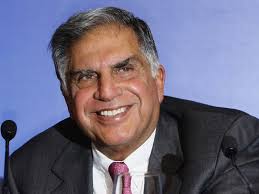 Mentors are important to all of us, especially those with many dreams. Although few entrepreneurs are fortunate enough to have a keen mentor in the family, it is possible to find one or two.  One such person is Ratan Tata who in turn has become a mentor himself.

There are very few people in the world and more so in India, who inspire with decency, with a strong set of values, who believe in what they say, who are torchbearers of not just a legacy but are deeply passionate about India and even fewer are from the world of business. Today, I have a guest who is not just a colossus but an inspiration to people across ages. Age doesn’t define him, his work does. He continues this tirelessly as someone who always believes in what he does and does what he believes in. He is the amazing Ratan Tata.

He always remembers his mentor and says, “I had a terrific mentor in JRD Tata. I remember walking back from the meeting in which I was appointed the chairman when he walked back. In fact, he was my greatest mentor and the years that he was alive, I used to go into his office and say J, I wish this had happened 10 years ago, we have got such a great relationship. He said I wish so too. ” Thinking a little, he continues, “So, I was very lucky in having him there. He lent his weight when he had to, example the retirement age. Without his support, I could never have done that. He would explode if he thought something that was being done that was wrong. However, on the whole, he was a terrific mentor. He was like a father, brother, gave advice – a terrific relationship and very important, not enough has been said about that.”

As far as qualities are concerned, he avers, “I would think if I were to have to pick one key quality, humility would be on the top of the list. JRD Tata was just a person who would love to be anonymous and to some extent that has rubbed off on me. I love to be anonymous. As you go through life, you find that that becomes less so and less possible and then you look at seeking anonymity by hiding.”

As far as entrepreneurship is concerned, he often recollects his interest in this area and recounts, “I was interested in innovative companies, usually small. I had Tatas invest in a computer company in San Jose in the bay area in the 1970s and I have always been sorry that India was not a part of this new wave of entrepreneurs that have set themselves up both, in the east coast and west coast of the US. But I could do very little in it because while I was in Tatas, that would be a conflict of interest somewhere.” He stopped then but did not forget this and says, “After I retired, I started taking the interest of looking at some of the new young start-ups in the country. Of course, it was a time when new start-ups were starting to take form in India.”

He calls this  a learning exercise and keeps his door open to all and has made small investments in many companies, saying there are some who fail but many he is proud of.

When we have people like Ratan Tata encouraging entrepreneurs, I am certain entrepreneurship and mentorship has certainly arrived in India.