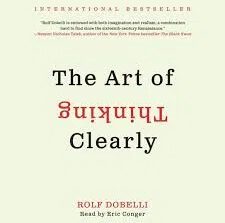 The Art of Thinking Clearly is a book by Rolf Dobelli that aims to help us make better decisions in life.

However, rather than trying to introduce new behaviors, it wants us to recognize and then cut out some common errors of judgement we fall prey to on a regular basis.

These are caused by cognitive biases that most of us don’t realize are happening but that can seem so obvious when pointed out.

You may have heard of some of these cognitive biases, although probably not all 99 of the ones explained in the book.

Some examples of them include:

Whether you’re into self-improvement or not, we could all do with making fewer bad decisions and more good ones.

The short chapters of The Art of Thinking Clearly make it easy to get what you need from it.

Whether I then go and explore it more deeply is up to me. If it’s something that doesn’t really affect me, I probably won’t.

Being able to dip in and out means I don’t have to waste too much time on cognitive biases that didn’t interest me as much.

That’s not to say any of the chapters were irrelevant, though.

Everyone is different. A chapter that opened my eyes to something important and relevant to my life may mean little to someone else, and a chapter that meant little to me may change the world for that same person.

This is where I think the true value lies in The Art of Thinking Clearly.